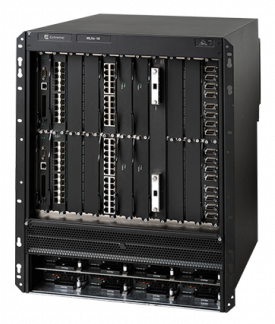 The way organizations communicate and conduct business has changed dramatically in the past decade. Services such as high-definition video streaming, cloud services, and anytime/anywhere mobile connectivity not only consume an enormous amount of network capacity, but alsocreate a greater degree of complexity for network operations. As a result, today’s network planners are seeking solutions that provide the right mix of scalability, performance, programmability, and operational simplicity.

The MLX Series is highly optimized for IP Ethernet deployments, providing symmetric scaling with chassis options that include 4-, 8-, 16-, and 32-slot systems. These routers offer industry-leading wire-speed port capacity without compromising the performance of advanced software capabilities.

For example, the MLXe-32 delivers data forwarding performance of 6.4 Tbps and a switch fabric capacity of 15.36 Tbps, enough capacity to future-proof networks for years to come. However, true router scalability is measured not only in terms of packet forwarding performance, but also in the scalability of the hardware forwarding tables and maturity of the control plane. The MLX Series offers a flexible scaleas-you-grow model with hardware Forwarding Information Base (FIB) capacity options in a wide range of interface modules supporting up to 2.4 million IPv4 routes or 1.8 million IPv6 routes. In addition, the robust control plane has been proven in thousands of missioncritical deployments around the globe.

SDN-Enabled Programmatic Control of the Network

Software-Defined Networking (SDN) is a powerful new network paradigm designed for the world’s most demanding networking environments and promises breakthrough levels of customization, scale, and efficiency. The MLX Series enables SDN by supporting the OpenFlow protocol, which allows communication between an OpenFlow controller and an OpenFlow enabled router. Using this approach, organizations can control their networks programmatically, transforming the network into a platform for innovation with the agility to support new business requirements, applications and services.

The MLX Series supports OpenFlow 1.3 via an innovative hybrid port mode which allows simultaneous deployment of traditional switching or routing forwarding with SDN control on the same port. This unique capability provides enables network operators to integrate SDN into existing networks to gain the agility provided by software-based control for specific flows while maximizing their investment in traditional network platforms carrying most network traffic which is switched or routed as before. The MLXe VersaScale packet processor hardware support for OpenFlow enables organizations to apply these capabilities at scale for up to 128,000 flows per chassis with line-rate performance for 100 GbE, 40 GbE, and 10 GbE ports.

Designed to enable reliable converged infrastructures and support missioncritical applications, the MLXe features advanced redundant switch fabric architecture for very high availability. The architecture helps ensure that the system continues to operate at peak performance even in the case of a switch fabric card failure. In the highly unlikely case of additional fabric failures, the advanced architecture allows the system to continue operating in a graceful degradation mode, where the system tunes its performance to the remaining fabric capacity.

Advanced Capabilities for a Broad Range of Applications

The ExtremeRouting MLX 4-port 10 GbE IPsec module for the MLXe provides inline IPsec encryption capabilities at wire speed, ensuring data privacy without compromising performance or complicating deployment models. With support for four additional ports of 10 GbE/1 GbE (combo) and four ports of 1 GbE, it supports an industry leading capacity of more than 44 Gbps encrypted traffic per halfslot module and up to 128 IPsec ports of 10 GbE in a single MLXe system. The inline ports for IPsec deliver unmatched performance by requiring no service module to be used, freeing up slots in the chassis to be used for other routing applications. This programmability enables one of the strongest cryptographic suites for IPsec—Suite B— available in hardware of the MLXe. For additional security, the module supports IEEE 802.1AE (MACsec), which provides 128-bit Layer 2 hop-by-hop encryption for Local Area Network (LAN) use cases.

The MLXe provides visibility capabilities to non-disruptively and transparently tap into a production network with no loss in performance. It filters and extracts relevant network traffic based on the rules configured statically or dynamically on it. Industryleading port density, low latency, high throughput, and scalability make the MLXe router a powerful solution for carrierclass environments. By implementing network visibility with the MLXe, network operators can increase efficiency and scale of analytics into network data and traffic, process captured data to evaluate network and application conditions, and generate actionable metrics and reports used for network planning.

Up to 9.5 billion packets per second routing performance with non-blocking 15.36 Tbps data capacity

Ideal for demanding, high-density environments with up to:

Industry-leading scalability up to:*

The MLXe provides a wide range of leading-edge Ethernet modules for 100 GbE, 40 GbE, 10 GbE, 1 GbE that enable organizations to use a single platform for many applications. For more information about these modules, see the tables below.